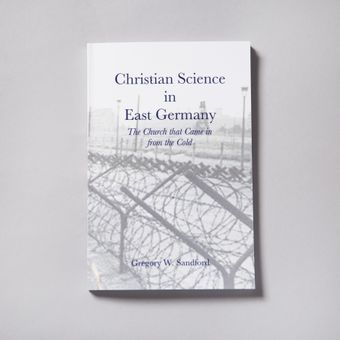 Christian Science in East Germany: The Church that Came in from the Cold by Gregory Sandford

Christian Science was denied official recognition for decades and attracted special enmity from the German Democratic Republic (GDR, East Germany's official name) because of its American connections and its practice of spiritual healing.  Over the decades, small groups of Christian Scientists continued to meet in private homes and found various ways to smuggle in Christian Science literature into the country.  In 1989, a week before the fall of the Berlin Wall, Christian Science was officially recognized as a legal denomination -- the only such recognition ever formally granted by the GDR to a new religious organization.

Author Gregory Sandford served for eighteen years as a diplomat in the U.S. State Department with postings in East Berlin and Munich, Germany, and in South Africa. He also lived and worked as an exchange student in East Germany while researching his doctoral dissertation.